The tensions on Indo-China border is increasing day by day. Both armies are facing eyeball to eyeball. They are backed with infantry, tanks, armored vehicles and air defense. It is not at all a good situation to face both the militaries in a combat ready mode. Defense experts have rightly pointed out that a small local angry incidence can flareup the battleground.

But the question is, why China is picking up this quarrel with India, knowing it will be very difficult to grab any more disputed land on LAC using force. 2020 India is not 1962 India to be humiliated. Indian armed forces are very well prepared to give a befitting answer to China.

China is also facing hostile situation on its South and South East side. American aircraft carriers are patrolling South China sea. China is having a big problem going on in Hong Kong plus it has picked up fight with Taiwan. Japan, Indonesia, Philippines, South Korea and Vietnam. They too are rattled with China's expansionary policy.

When China is having problems on all its borders then why is it showing hostile posture with India? If the conflict really breaks out then China has more to lose than India. China has already earned bad reputation due to Chinese Virus (COVID19) and a war with India will isolate China internationally.

This is important to note, after 1962 war till now, China had highlighted border disputes on the North East border of India. They have raised objection about Arunachal Pradesh, Meghalay and Sikkim. They have never picked up a border dispute in the plains of Ladakh after 1962. But now they are picking up a fight in Ladakh....WHY?

Challenges on the of J&K border

Before we analyze WHY China is picking up fight in Ladakh, let's first understand how the map has changed since 1947 between India, Pakistan and China in the Jammu & Kashmir region. 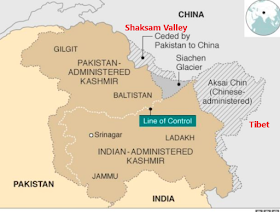 Then in 1950 China started building a road inside Aksai Chin w/o India's permission. They wanted to grab Tibet and access to Tibet from mainland China is very difficult due to mountain ranges. Hence they started illegally occupying Aksai Chin to build roads to go to Tibet. This construction activity started in 1950, but was never detected by Indian military till 1957.

By the time it was detected, it was too late and Nehru ceded Aksai Chin to China saying, that land is useless because it is a cold desert and cannot grow even a single leaf of grass! But obviously Nehru missed the geographic importance of Aksai Chin. He surrendered to the Chinese bullying. He thought, his socialistic ideologue friend China would stop by taking Aksai Chin. But that was not China's aim. They wanted Tibet and that is why they occupied Aksai Chin.

Nehru realized China's real intentions when China attacked Tibet, but by then it was very late. In 1962 India was dragged into a  war with China without military preparation. Nehru was not a firm, resolute and dynamic leader to lead this war. This fact has recorded by number of military experts and diplomatic experts. The moment he realized well prepared Chinese military is getting heavy on ill prepared Indian military, he started giving conflicting signals to the Indian military. As a result, Indian military faced heavy human losses and this demoralized the military. The situation was so grim that Chinese forces were about to enter Assam and Nehru had mentally accepted to give away Assam to stop Chinese forces.

By that time US had sent its forces to support India. China was aware about it and thus unilaterally declared ceasefire before US forces could reach India. They retained the hold on Tibet but vacated other captured parts of India. India was  defeated and humiliated by China in the war. As a result, India lost Aksai Chin and Tibet, both.

After 1962 China war, Pakistan became more closer to China. Pakistan was always fearing that, one day or the other India will attack Kashmir Valley and reclaim PoK. To mitigate this risk, in 1963 Pakistan donated part of Kashmir to China. This part is marked in the map as "Shaksam Valley". Pakistan thought that if China is made party into the Kashmir dispute then India cannot do anything as India cannot challenge China!!! This is how, China got foothold in Kashmir valley.

If you see the map, there is a very small triangular portion that is between Shaksam Valley and Aksai Chin. This is Siachin Glacier. This small portion of Siachin Glacier is separating two Chinese illegal occupation, that is, Askai Chin and Shaksam Valley. If Siachin Glacier peaks are occupied either by China or by Pakistan then Kashmir valley would firmly connect with China mainland.

It is strategically so important that the whoever controls the peaks of Siachin Glacier, they would practically control activities happening in mainland China, Aksai Chin, Shaksam Valley and Pakistan's PoK.

The Karokoram highway that connects China with Pakistan through road, passed through Siachin Glacier. Karakoram pass, which is one of the oldest trade route is also in the same region. The Karakoram Highway is so close to the Siachin Glacier peaks that normal machine gun fire can block the road. Hence it is a big threat to China and Pakistan.

Siachin Glacier is a very inhabitable, mountainous and rugged terrine, where living is not possible. This area is always covered with snow, freezing temperatures less than -30 degree Celsius, unpredictable winter storms and huge avalanches.  Due to these reasons, no one between Pakistan, China and India had claimed this region till 1984. It was practically no man's land because all parties thought, it is impossible hold on to the occupation.

But this changed in 1984 when India captured Siachin Glacier and fortified it's military position. After capturing, India fought number of battles with Pakistani army who tried to capture it back but they failed. Since then, Siachin Glacier is firmly controlled by Indian Army. Pakistani still wants to capture this region for the obvious strategic importance.

India has not only fortified all the mountain top ranges in the Siachin Glacier but even made the Daulat Beg Oldie Air Force base fully operational. This base is situated at 5.1 Kilo Meters height and temperatures are below -30 degree Celsius. Please see the map of Daulat Beg Oldie base to understand its strategic importance.

It is located at a very strategic point to cover China occupied Shaksam Valley, Aksai Chin, Mainland China and Pakistan occupied POK. From this air field Indian Air Force can attack deep inside Pakistan and China. The only challenge is, because of the height, IAF fighter planes have some limitations on carrying fuel and weapons. But that is a different topic to discuss.

China's financial interests in this region...

China had built Karakoram highway long back to connect Pakistan with China by road. This is their old trade route but it is very long and treacherous route. Plus it was not connecting to any seaports in Pakistan.

China's crude oil supply from Arab countries and Africa is through oil tankers that travel from Arabian Sea, circling Sri Lanka, Malaysia, Indonesia, then into South China Sea and finally into China.

As you can see this route is very long and expensive to get crude oil into China. It is also expensive and time consuming to supply Chinese goods to the West Asia.  Every country needs cheap oil for its economic growth. High transportation cost for oil was hampering China's economic growth plans. Hence they came up with Silk Routes and One Belt One Way policy. This plan is to connect 70 countries for the trade purpose.

As a part of this policy, China started China Pakistan Economic Corridor or CPEC initiative. Under this plan, China developed port of Gawader in Pakistan for oil pumping. Then created multiple highways inside Pakistan to link East, Central and West Pakistan. All these highways lead to one highway into Gilgit Baltistan. The plan is, get oil from Arab countries in tankers to Gawadar port and transport it to China using CPEC road. The bigger plan is to create pipelines from Gawadar port till China along the CPEC road.

Please see the map below to understand CPEC route and its use of Gilgit Baltistan. 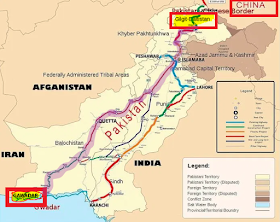 On top of it, India has protested with China and Pakistan for illegally using Gilgit Baltistan area for CPEC. This is because, India claims entire princely state of J&K that joined India in 1947, is legally owned by it. India plans to reclaim this illegally occupied land from Pakistan and China.

And...this is where the current problem is.

China is fearing, if India really reclaims Kashmir Valley, Gilgit Baltistan from Pakistan and reclaims Shaksham Valley and Aksai Chin from China then it will be a big jolt for China's CPEC plans.

It will be cut off from Pakistan completely and thereby with Arab countries and African countries. This will disrupt their oil supply and goods trade route with West Asia. And on top of it, if India blocks sea route for Chinese ships in Arabian Sea then it will face huge problem.

It is because of this fear, China is showing aggression in Ladakh. China and Pakistan feels that if India is challenged on two fronts then India will not dare to reclaim POK and Gilgit Baltistan. They both want to grab more land of India so that their CPEC road connection is not threatened.

Look at the map where there is a current military conflict with China in Ladakh region. 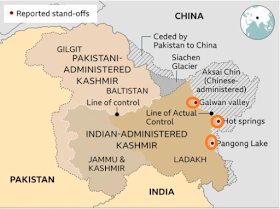 My estimate is, these hot spots are just the decoy. China and Pakistan wants India to look some other way so that they can achieve their goal.

I strongly think, the plan is something like this.
Pakistan and China wants to capture some more land of Ladakh, cut off Siachin Glacier and create a rock solid, wide connection between China and Pakistan.

Please see the map below to understand what may happen. 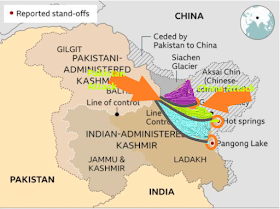 The military plan of China and Pakistan might be as follows.

Both these forces would capture the portion of Ladakh; that could be in one of the three ways shown above (depicted in three colors).

Grabbing the land around Siachin Glacier would join Pakistan with China with solid mass of land and then, India cannot threaten Pakistan to reclaim PoK and Gilgit Baltistan.

China may agree on the negotiating table to take back its forces from the three hot spots but in reality it will never pull back. China is known for such treacherous behavior and should never be trusted. They played the same game of negotiations with India in 1962. This time too, they will attack India when both Pakistan and China are ready to attack. Till then China will continue to come to the negotiating table with a statement for "peace".

India must be prepared to fight a big bloody war with China and Pakistan simultaneously.

China may open another front in the North East region of India to stretch India's fighting forces.

Pakistan may try to infiltrate terrorists in Kashmir Valley and start internal disturbances.

Indians must get prepared...